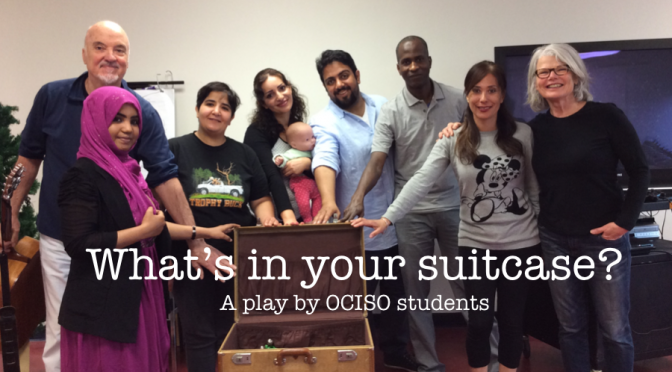 Can theatre help newcomers to learn English as a second language?

As volunteers with the weekly conversation groups for students attending the LINC program at the Ottawa Community Immigrant Services Organization (OCISO), we decided to put this question to the test. For the past two years, students have had the opportunity to join a weekly drama group, rehearse an original play and perform that play in front of an audience.

In theory, drama teaches speaking skills, such as articulation, volume, tone, and pronunciation together with some basic theatre knowledge such as staging, characterization, and direction. In reality, participants learn teamwork, gain self-confidence, and see how to bring creative ideas to life. While terms such as downstage or scene are hardly essential words for newcomers, we believed these real-life skills might serve them well and reinforce classroom ESL lessons. By building speaking confidence, encouraging teamwork among people from different cultures, employing focus by memorizing and performing in front of their teachers and peers, we hoped the students could be inspired (and inspire!) by taking on and overcoming this huge challenge.

The big question remained: can a cast from several different countries, some of whom had never experienced live theatre, come together to produce and perform an original play? After two student productions, the answer is a resounding YES!

The overwhelming reaction to the plays has been positive. Teachers commented how they noticed certain actors speaking up much more in class. One teacher said that when she asked her class what they like most about school, cast members immediately said, “drama group!”. Many students told us that the experience had improved their confidence speaking English, some that they never imagined they could do what they had just accomplished. Others said they had liked meeting and working with students from other nationalities. One remarked that now, “Everyone here knows me and my story.” Another has promised to return in September and help recruit our next cast because she said the students should all know what a great opportunity and experience this is.

The following points may help others thinking they’d like to produce a similar ESL piece of theatre.

1. Get buy-in for the project. Rehearsal space will be required, cast members will inevitably miss some class time, and there may be interruptions to the school’s regular daily schedule. Having the support of managers, all teachers, and other staff is essential. Our experience was that everyone got caught up in the excitement and reacted very positively to having a drama group each week.

2. Find several courageous actors. We all know that speaking in front of an audience is a scary prospect for most people. Acting a role on stage is even more daunting. So, imagine the courage it takes to agree to perform in a foreign language!

We asked for class time to speak to students in CLB levels 3 to 6 and got across the idea of what we planned to do. Whether it required acting out a small demo scene or asking who wanted to be the next Angelina Jolie or Brad Pitt (yes, those names seem to have global resonance!), the pitch resulted in several brave students stepping forward.

Over time, a number of cast members withdrew, usually because they were leaving the school for a job or other demands. Some worried they might be missing too much class time. Miraculously, we always found replacements and began again with the new recruits. This, along with only having one morning a week to rehearse, meant it took a whole school year to produce our half hour play.

3. Decide what to perform. We considered trying to nd a simple play that we could adapt to the abilities of our students. But, in talking with the aspiring actors and based on things we’d already learned about them from our ongoing volunteer experience, the decision was made to take several of their stories and turn them into simple dialogue scenes. A couple of students wrote incredibly evocative poems which became readings with actions, story theatre style. By varying the dramatic style of the scenes, some memorized, some read chorally, or a combination of the two, we hoped to keep both audience and actors interested.

As mentioned, many students came and went but we kept the stories even if their authors were no longer part of the cast. The stories may have been personal but the sentiments they brought to mind were universal. Our first year, the title of the play was “Lean on me” and the theme was the importance of human relationships in our lives. This year, our title was “What’s in your suitcase?” and the theme was fond memories of one’s homeland and how we bring them with us—like clothes in a suitcase—when we travel to a new land. 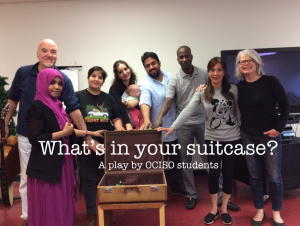 4. Arrange rehearsals. Thursday mornings at OCISO are conversation periods for some classes so we already had this block of time that could be allocated to rehearsals. We took over the community room/teachers’ lunchroom, so we always had the same space in which to practise. Rehearsals started with a voice and physical warm-up. There are plenty of these on-line (e.g., http://wgdramaclass.blogspot.ca/p/vocal-warm-ups.html).

Because of our somewhat rotating cast, characters were numbered in each script, so new actors could be assigned roles without a script revision. To help with memorization, individual lines were kept to short, simple sentences; long speeches were avoided, action was encouraged as was humour, and each scene was kept to two pages maximum. Each actor was assigned a major role in only one scene and they were paired up in different scenes. This made absences during rehearsals easier to work around.

Pronunciation was an ongoing task for us, as was editing in process; words were simplified, sentences re-cast, imagery explained. This all contributed to the students acquiring new vocabulary and to learning appropriate intonation.

Giving non-actors a basic sense of the stage, such as facing downstage (i.e., the audience) or blocking a scene, often required gentle reminders, sometimes re-positioning an actor as rehearsal progressed. We kept a prompt book, recording stage movement scene by scene using diagrams which we could refer to each week without having to try to remember where each actor should be placed at that point in the action. For stage volume, one of us would position ourselves at the back of the room and ask the actors to speak loudly enough for us to hear them.

5. Put on the final touches. Both plays have had a musical component. One of the OCISO teachers had organized a student choir and so, the first year, we invited them to be part of our production. They enthusiastically agreed and we selected a song, “Lean on me” by Bill Withers (which became the title). This year, we used “We are all running” by Andrew Dale from the Newfoundland group, The Once. Instead of the choir, we had the actors sing and employed the chorus as the intro and finale of the play, with the audience encouraged to join in.

Both songs conveyed and expanded our themes clearly; the melodies are memorable and the lyrics are simple and catchy (can easily become earworms!). Repetition meant the words were quickly retrievable. We added guitar accompaniment to the singing and to help convey action on stage such as climbing a tree and transitions of time and place and scene changes.

We found costumes and sets just got in the way of short scenes and quick changes, so these were kept to a minimum. The actors had input to what did get used, and several brought in items they thought would add to the production. Reflecting the title, “What’s in your suitcase?”, our main prop this year was an old suitcase that was carried on at first entrance and was used from scene to scene to underscore the central metaphor.

Each year we have produced a programme so that the actors can see their names and photos in print and the other students can read a short synopsis of each scene. We also used it to print song lyrics to enable the sing-along. We added some visuals with a PowerPoint show this year to accompany the choral readings of the poems, thinking that this would aid the lower level audience members in the absence of any action onstage. These pictures were displayed on a large TV already present in the rehearsal room.

6. Prepare for performance Day. Given that we needed the entire school year to be ready for “prime time”, we planned for early June performances. We consulted with the teachers and staff to come up with a day that would not interfere with end-of-year testing, interviews, outings or class parties. Each play has run about thirty minutes and we did each one twice on the chosen day, in order to accommodate the whole school. Actors were, of course, nervous to begin with but, because of all the practice, soon relaxed on stage, especially once one of their lines provoked laughter from the audience. That’s when some of them discovered they really are “hams” at heart! And we are confident we will find more of them come September.

We believe producing a theatre piece with ESL students is a rich and rewarding endeavour, especially for volunteers. Teachers could take this on themselves but, if time is at a premium and you are fortunate enough to have volunteers, you could survey the group and see who might be interested in taking up the challenge. We guarantee it will be interesting, educational, emotional, and fun—in a word, priceless.

2 thoughts on “Stage right at OCISO”