Core Concepts from Multiliteracies for Language Teachers in Contemporary Times

Three nine-year-old boys are sitting on a porch in urban Canada. They are engaged in a multiplayer session of Terraria, a video game that purports to combine the creativity and freedom of a sandbox environment with the strategic requirements of an action game. Each child is holding his own device—an iPod Touch, an iPad, an android tablet. Their eyes are xed on their own screens, sometimes scanning over to the others’, ngers busily pushing and swiping as they build biomes. During the game, one of the boys opens an Internet browser, types in a term from the game, and the children collectively research how to nd an element they want. Through the search results they read blog posts from other players and add their own information to the mix. All the while they are playing, the boys are talking away to each other. If you were to listen in and focus on the discourse, you’d hear all seven of Michael Halliday’s functions of language: instrumental (“I want to build…”), regulatory (“Do this here and…), interactional (“Let’s…”), personal (“Watch me when…”), informative (“When you go here…”), but especially heuristic (“What happens when you…”) and imaginative (“In this world…”). Given such events, literacy research has been grappling with questions like, what is literacy in this new communicational landscape (e.g., is video gaming a literacy practice?) and what are the implications of the response to this question for education?

Though the vignette above might scream of concerns germane to the present day, they actually predate the turn of the century. Recognizing that communication technology and globalization were creating unprecedented changes to the ways in which people were communicating and that this would have massive implications for education, in 1996 a group of scholars convened in New London, US, and established the New London Group. The group’s mandate was to consider the evolving nature of literacy and its implications for teaching and learning. Its rst product was the revolutionary paper published in the Harvard Educational Review, entitled, A pedagogy of multiliteracies: Designing social futures. The paper emphasized the concept of designing which the NLG de ned as the forms and “process of shaping emergent meaning” (p. 74). The NLG argued that as designers of meaning, teachers and learners alike could become “active participants in social change” (p. 65). We read this work to mean that if people are designers of meaning, then they are de facto designers of social futures, as they shape, reshape, and represent meaning and put all of this out into the world ready to be shaped and reshaped by others.

The NLG’s concept of design rejects the idea that literacy means one thing to all people, that this one thing is unchanging for all time, and that it is equal to a set of skills that can be passed from teacher to student. The pedagogies and research that have come out of and since the NLG instead express some similar fundamental principles that emphasize the pre x multi- and reframe literacy as literacies. Among them:

The original pedagogy of multiliteracies proposed by the NLG has been adapted and revised over the last two decades, but the frame remains signi cant enough to repeat. It relates four general pedagogical components. In brief they are,

Now, in 2016, scholars continue to build from the principles and pedagogy above, advocating for ways to enhance literacy education so that it is as dynamic and intricate as the practices it is trying to teach. For instance, NLG member, James Paul Gee, has focused much of his work as of late on video gaming. In doing so, he has come to a potent nding: when gaming, people will persevere through complex, sustained, and dif cult problem solving, and they will love doing it. In fact, they will pay money to do it. This nding is re ected in the opening vignette which also, when considered in relation to multiliteracies, contains evidence of literacy practices. The implications for education are massive, with Gee himself asking, “How do you get someone to learn something long, hard, and complex and yet enjoy it?” (Gee, 2005, p. 34), and how do you do this in an era of multiliteracies? The NLG has started us on our way. 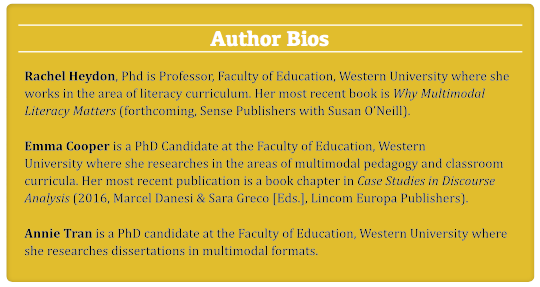