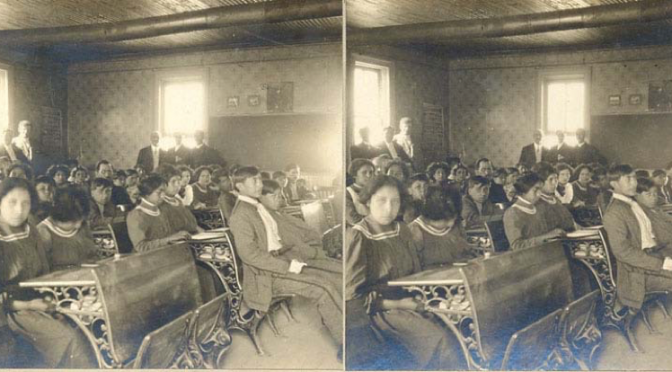 ). The Algonquian languages are Ojibwe, Cree and Lenni Lenape (Delaware). Algonquian loanwords in English include caribou, chipmunk, moose, pecan, squash, totem, wigwam, and woodchuck, as well as many place names in the province, including Etobicoke, Nottawasaga, and Oshawa. The Iroquoian languages are Mohawk, Oneida, Onondaga, Cayuga, Seneca and Tuscarora, all spoken on the Six Nations Reserve near Brantford in southwestern Ontario. Place names such as Toronto, Ontario, Niagara and Erie reflect the province’s Iroquoian heritage. 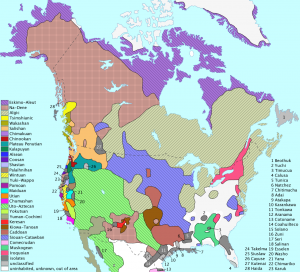 Teaching English to the Aboriginal peoples of  Ontario involved special challenges. They did not have a writing tradition. Compared to English, these languages have many more verbs than nouns, and have on average longer words, with fewer words in each sentence. Algonquian languages have mandatory noun classes of animate (usually referring to elements that are alive) and inanimate (usually referring to elements that are not alive). Verbs have mandatory suffixes reflecting the appropriate noun class. While there are no sounds in these languages that would seem strange to English teachers, Iroquoian languages had a full complement of nasal vowels, but lacked the labials /p/, /b/, /f/, /v/, and /m/. And some concepts would be new and would require a lot of explaining. None of these languages had concepts of innocence and guilt. And in none of these languages did people swear. That was what English was for!

The schools in which the Aboriginal children were taught were in some senses like other schools in the province, but were otherwise unique. William Lyon Mackenzie, writer, mayor of Toronto and rebel, described an Aboriginal one-room school house that stood beside the Credit River west of Toronto as follows. The building had:

tiers of raised benches in the rear; on one division of which sit the girls, and the boys on the other. There are also desks and slates for ciphering and copy books and copper-plate lines for those who write. The Bibles and Testaments are chiefly those of the London Society for Promoting Christian Knowledge… Among the school-furniture, are a handsome map of the world… attractive alphabets on pasteboard; regular figures illustrative of geometry. … The walls of the school are adorned with good moral maxims… [including] No blankets to be worn in school [emphasis added]. (As cited in Fairly, 1960, p. 46)

The first schools used to teach English to the Aboriginal people of Ontario were run by churches: Methodist, Anglican and Catholic. The Methodists had an aggressive conversion mission, which had the positive result of incorporating a number of the natural leaders of the people they worked with, the Anishinabe (known in English as Algonquin, Chippewa, Mississauga and Ojibwa). One of their success stories as an English student was George Copway (Gaagigegaabaw “He Stands Forever”), who in 1847 published the first book every written by a Canadian Aboriginal person, the autobiographical The Life, History and Travels of Kah-ge-ga-gah-bowh, which quickly became a best seller.

Another leading Anishinabe who learned English in a Methodist school was the Reverend Peter Jones, known in his native Ojibwe language as Kahkewaquonaby (“Sacred Feathers”) was heavily committed to the formal education of his people:

I feel very anxious to see an institute of this kind established among us, for I am fully persuaded that our children will never be what they ought to be until they are taught to work and learn useful trades, as well as to learn to read and write. (As cited in MacLean, 2005, p. 98)

In 1847, Egerton Ryerson, who started his career as a Methodist missionary teaching Aboriginal students, a foundational figure in the development of education in Ontario, after whom a university in Toronto is named, declared his plans for Aboriginal education. He clearly articulated the assimilation goals of all residential schools that were to follow. Teaching English and other subjects was directed at ridding the students of their Aboriginal heritage and acquiring a new, “civilized” culture:

There is a need to raise the Indians to the level of the whites…and take control of land out of Indians’ hands. The Indian must remain under the control of the Federal crown rather than provincial authority, that efforts to Christianize the Indians and settle them in communities be continued… that schools, preferable manual labour ones, be established under the guidance of missionaries. … Their education must consist not merely training of the mind, but of a weaning from the habits and feelings of their ancestors, and the acquirements of the language, art and customs of civilized life. (As cited in Steckley & Letts, 2010, p. 239)

In southern Ontario the Methodists were the most aggressive in developing schools where English could be taught to Aboriginal people. One of their most successful institutions was the Alnwick Residential School. Initially run by the Reverend William Case, it began in 1828, on Grape Island, in the Bay of Quinte, at the eastern end of Lake Ontario, as a small learning establishment with four girls aged 10 to 14. It was thought that they would provide teachers for similar establishments across Ojibwa country. The school moved to Alderville in the Rice Lake area in 1837, with funding provided by the annuity payments (annual payments for land surrendered in treaties), and by butter and cheese made and sold by the students.

In 1853, James Musgrove remarked on the success of students in the difficult task of memorizing and being able to recite verses from the Bible:

Thousands of verses have been recited. Henry Jones, from Owen Sound, recited between 2 and 3,000 alone. Others have approximated Henry, and done admirably, but none have been able to commit so many verses and to recite them so accurately. (As cited in MacLean, 2005, p. 116)

It should be remembered that these people came from an oral tradition in which stories remembered and religious text were passed down orally. This English teaching strategy was playing to the traditional strength of the people’s language experience.

Affiliated with the Alnwick school was the Mount Elgin Industrial Institute in southwestern Ontario near London. Founded in 1851, it was funded largely by 25% of the annuity payments from surrounding First Nations and was run by the Wesleyan Methodist Society. With the exception of four years in the 1860s, it ran continually from 1851 to 1946, when the buildings were condemned and the school was shut down. English was far down the list of subjects taught, as the students were taught skills that enabled the farm attached to the school to successfully function financially. In 1851, students had a schedule running from 5:00 a.m. to 9:00 p.m. They daily spent some 7.5 hours in physical labour, the boys learning and working at carpentry, shoemaking, blacksmithing and wheelwright work, the girls were assigned tasks sewing, spinning, knitting, weaving and tailoring. Only 5.5 hours were spent in the classroom (MacLean, 2005, p. 114; Figure 2 is a photo of the classroom). Students were strapped for speaking their native language, which could be Ojibwe, Delaware or Oneida, all with speakers in the area. As with all such religiously run institutes, the main body of English teaching related to the Bible and religious works.

Figure 2. Students in class the Mount Elgin Institute, circa 1909. Retrieved from http://thechildrenremembered.ca/ photos/?id=1608&school=Mount%20Elgin

In 1854, Samuel Rose commented on the “progress” in English in the school (shown in Figure 3):

Over 107 have been received since its commencement… sixty of these have been taught reading, writing, geography and arithmetic, and 13 have made some considerable advancement in to them, the dif cult study of English grammar, while the remainder, owing to the limited amount of time spent in the institute, have not advanced beyond the primer. (As cited in MacLean, 2005, p. 114) 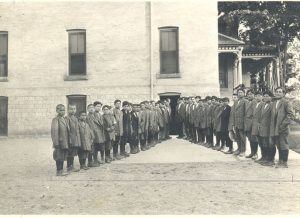 Figure 3. Boys lined up at the Mount Elgin Institute, circa 1909. Retrieved from http://thechildrenremembered.ca/ photos/?id=1636&school=Mount%20Elgin

So far, I have not mentioned the “dark side” of residential schools, which was a consistent part of these educational institutions in Ontario as in the rest of Canada. This black mark on Canadian history is perhaps best illustrated by another school in southern Ontario, the Mohawk Institute Residential School, beside the Six Nations Reserve. It was run by the Anglican Church.

It was the first and longest running residential school, established in 1831, and closed in 1969. The main building still stands as part of the Woodland Cultural Centre. My own memory of that building is of sitting outside on a park bench reading a biography of the Onondaga athlete, Tom Longboat (1887–1949), Canada’s most accomplished long distance runner of the first half of the 20th century. I was reading about how he hated the school and, appropriate for his life’s career, ran away from it. I looked up at the building, imagining it through a child’s eye, and felt intimated by the sheer institutional bleakness of what I saw (see Figure 4). 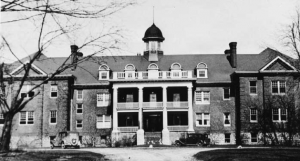 Another famous Six Nations individual, E. Pauline Johnson (1861–1913), a Mohawk writer whose poem, “The Song My Paddle Sings” was memorized by generations of Canadian school children, could have been a student in the Mohawk Institute Residential School, but fortunately for her she was “sickly”. She was home-schooled by a series of governesses (her family was well-to-do) and was taught the finer points of the language that way.

The school was called “Mush Hole” by the inmates, speaking of the poor quality and general lack of food served there. In 2011, archaeologists uncovered the bones of some children who had attended the school. This school, like most of the others, had a high death rate, and children were often buried anonymously, and doubtless unceremoniously, the victims of disease and probable abuse.

The first schools teaching English as a Second Language to Aboriginal children, the ones discussed in this short article, probably were quite positive at the beginning, being mostly small, and some of the leaders of the people were engaged in their children’s learning. Historically important Canadian educators were involved. James Evans (1801–1846), for example, who began as a missionary in 1827 to the Rice Lake Anishinabe first developed a syllabic writing system for their language that was adapted for use by the Cree and the Inuit. It made the former people one of the most literate groups in Canada by the late 19th century. But over time, the initial enthusiasm waned, the quality of the educators and the education diminished sharply as funding became more and more inadequate. In 1910, the curriculum was deliberately “dumbed down” by the Minister of Indian Affairs, Duncan Campbell Scott. Tuberculosis ravaged the schools, so death became almost as common in some institutions as graduation. Abuse became rampant, a people greatly suffered and is suffering.