Critical thinking (CT) is a fundamental defining concept of a Western university education (Barnett, 1997) and it lies “at the heart of EAP” (de Chazal, 2014, p. 12). However, there is  a  discrepancy  between  the  findings  of  several  experimental  studies  that  show  CT to be particularly suited to a content or theme-based approach, and how it is currently conceptualized  and  taught  in  many  English  for  Academic  Purposes  (EAP)  programs. Some EAP foundation programs tend to regard it as a discrete transferrable skill- one not necessarily embedded within a particular theme or subject.

This article aims to answer one question: how can CT best be taught to EFL/EAP students? It will argue that integrating the teaching of CT within a discipline or subject is particularly effective for EFL learners. It will also propose a discipline-specific model for teaching CT in the EFL classroom.

Should CT be Taught as a Discrete set of Skills?

Although many agree on the importance of CT, there are diverse opinions regarding what the concept is. Moon (2008, p. 33–34) asserts that its characteristics are assessment of evidence, critical appraisal, reflection, understanding, analysis, synthesis, and evaluation. Judge, et al. (2009, p. 1–2) emphasize the objective to subjective process and the necessity of providing supporting evidence. Ennis argues that it “is a form of reasonable, reflective thinking, focused on deciding on what to believe or do” (1987, p. 10).

Notwithstanding its exact meaning, let alone its definition, CT has often been conceptualized in EAP as a component of critical literary or critical reading skills. In this view, students are taught to “critically” read a text, looking for such things as assumptions and flaws. They are asked “to understand what it is saying” (de Chazal, 2014, p. 12), and they are taught to ask questions such as:

Nevertheless, one fundamental assumption some EAP programs make regarding the nature of CT is that it is composed of several generic, transferrable skills. However, the literature manifests a difference of opinion on the topic, with the research falling into three broad camps. Some researchers (Ennis, 1989; Davidson, 1998; Gieve, 1998; Hawkins, 1998) assert that CT can be taught as if it were a set of generalizable and transferable skills—skills that the students can learn and apply to other literacy contexts. Others (Atkinson, 1997; Pennycook, 1999; Willingham, 2007) argue that CT is not an autonomous, cognitive skill that can be learned out of context; domain or subject-specific knowledge and practice are essential for its development. Alternatively, Jenicek & Hitchcock (2005) take the middle position, asserting that CT can be taught as an independent program or alternatively, it can be integrated into a subject matter course.

A Discipline-Specific Focus in CT

Bean (2011, p. 9) proposes that students need to understand the different ways various disciplines use evidence to make knowledge claims if they want to grow as critical thinkers:

Some disciplines derive their evidence from observations of natural or cultural phenomena, sometimes converted to numbers, subjected to statistical analysis, and displayed in graphs and tables. Other disciplines use qualitative data from ethnographic observations, focus group transcripts, or interviews… What new students don’t see is how these different kinds of data function as evidence in support of a claim. Teachers can accelerate students’ understanding of a field by designing assignments that teach disciplinary use of evidence or that help students analyze the thinking moves within an evidence-based argument.

Under this view, the starting point for an effective CT lesson would have to be a focus on a discipline-specific problem-solving task. The lesson should focus on an academic problem that is relevant to a given discipline. That is, teachers should be asking questions or requesting students to solve problems that an economist or biologist would be asked to think about or solve.

Next is the role of evidence. Students already know how to formulate a thesis or argument. They are also familiar with using evidence to help strengthen their thesis and any assertion they make that relates to their thesis. Like a lawyer in a jury trial, a writer must convince her audience of the validity of her argument by using evidence effectively. A discipline- specific approach would show them that the types of evidence used changes from discipline to discipline—they might use quotations from a poem or a literary critic, for example, in a literature paper; they might use data from an experiment in a lab report.

Last  is  analysis.  Students  already  know  how  to  analyze  data,  that  is,  the  process  of interpreting evidence in order to support, test, or refine a claim. A strong thesis requires solid evidence and analysis to support and develop it because, without them, a claim is merely an unsubstantiated idea or opinion. A discipline-specific approach would show how different disciplines can use different kinds of analysis (although there will be many similarities).

How might we teach a discipline-specific CT skills lesson? Let us take sociology as an example. What follows are two reading/speaking lessons based on extracts of a sociology power point presentation and an academic article. For the first lesson the class would first discuss the warm-up questions (Extract 1): 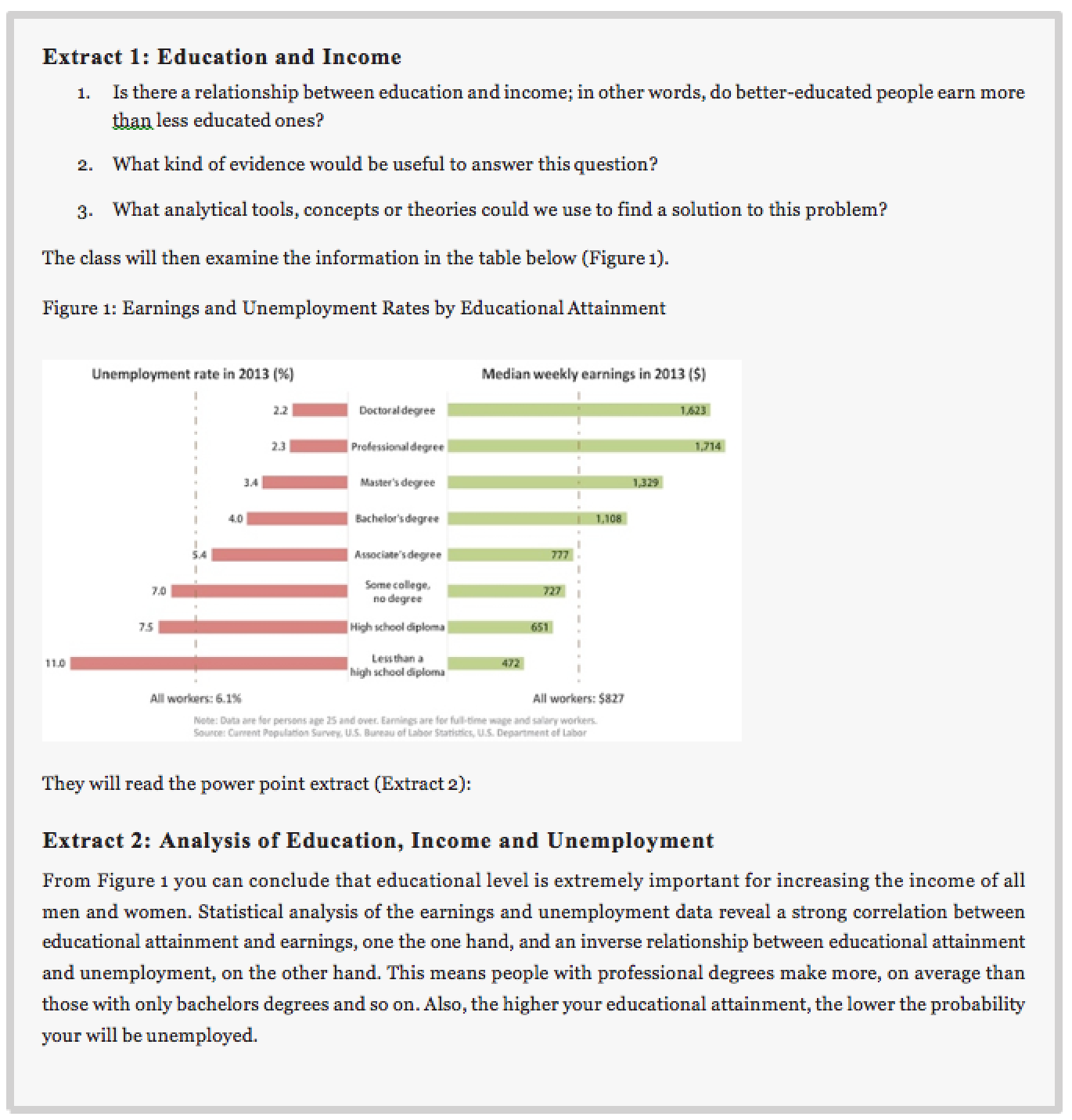 In this extract, the author wants to show that people’s educational level has an important effect on their income. Sociology frequently uses statistical tools such as mean and median, and utilizes earnings and unemployment level as evidence, and it breaks down these data according to educational level and presents them in visual form like the horizontal bar graph in Figure 1 in order to emphasize the link between education on earnings and unemployment.

What isn’t very visible is the kind of reasoning that sociology uses. Sociological reasoning often tries to establish a causal relationship between two or more phenomena (Extract 2) and then it establishes a mechanism that explains how one causes or is connected to the other. It establishes a causal relationship between two variables, in this case education and income and next proposes a mechanism or theory that can explain why A causes B. The class can brainstorm reasons, theories, and mechanisms that can explain this phenomenon and then compare them with the relevant sociological theories and concepts at a later lesson. 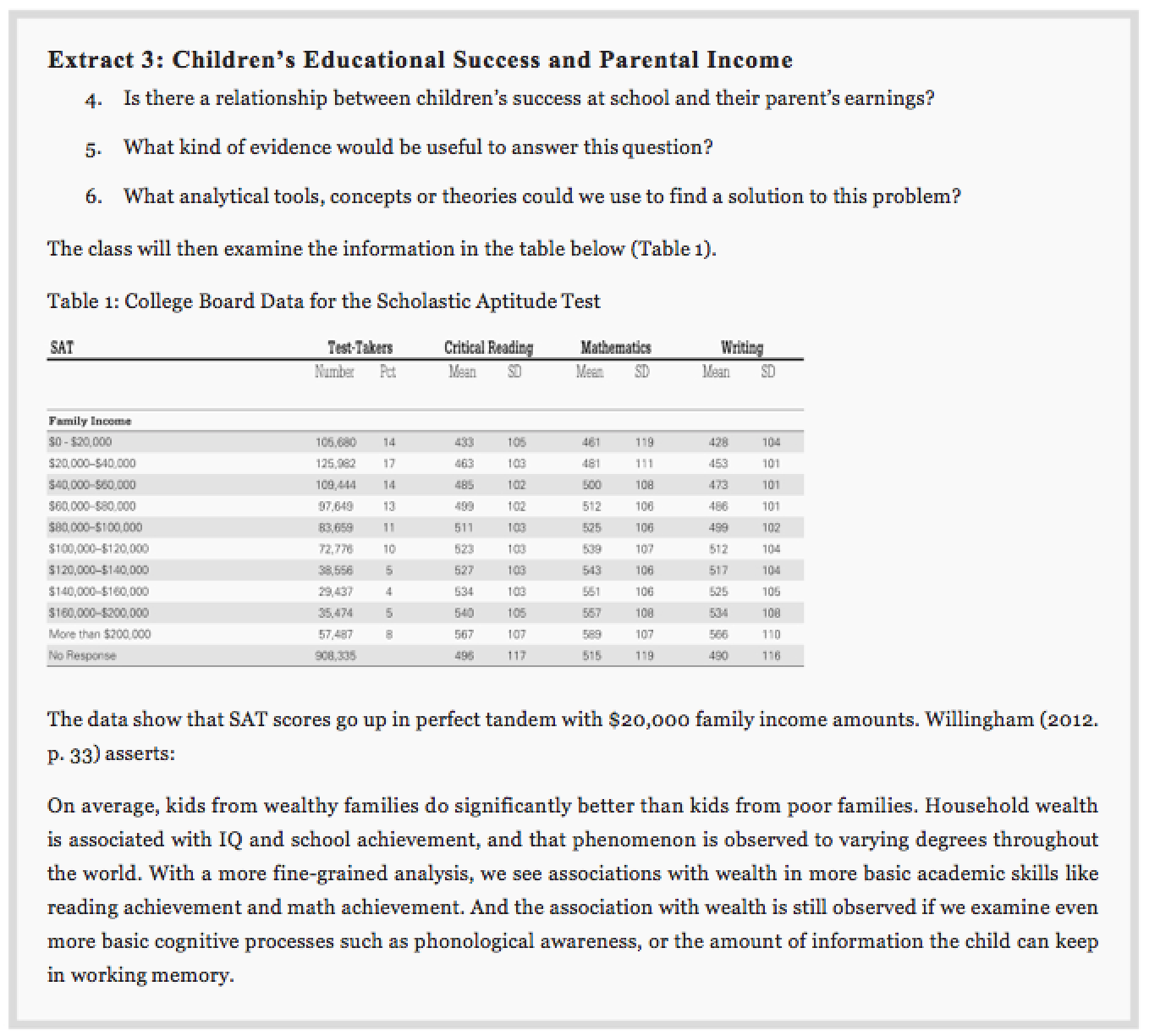 For another related lesson the class would first discuss the warm-up questions (Extract 3).

In this article extract, the author wants to show that family or household wealth has an important effect on children’s educational success. Sociology frequently uses numerical data such as household earnings, test scores, etc. as evidence, and it presents them in visual form like the chart in Table 1 above. The class can brainstorm reasons, theories and mechanisms that can explain this phenomenon and then compare them with the relevant sociological theories and concepts at a later lesson. The class can later focus on the language of correlation (Extract 4). 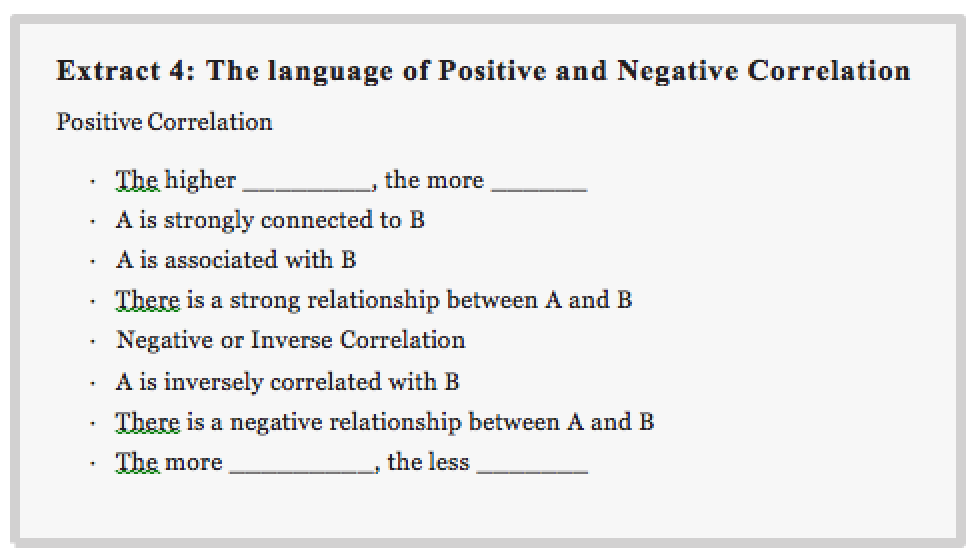 CT has often been conceptualized in EFL as a component of reading comprehension skills. Nevertheless, one fundamental assumption EAP makes regarding the nature of CT is that it is generic and transferable, that it can be taught as a disembodied skill. This article argued that integrating the teaching of CT within a discipline or subject is particularly effective for EFL/EAP learners. It also proposed a model for teaching CT in the EFL/EAP classroom.

Percival Santos (PhD, London School of Economics) was Assistant Professor of English for Academic Purposes at Dongbei University of Finance and Economics, Dalian, China. He currently teaches geography, sociology, history and religious studies at London Academy, London, UK. He has published several journal and magazine articles on critical thinking, research methods, academic writing, and the teaching of the social sciences.